The Australian Netball Players Association will enter into an updated Collective Player Agreement with the Suncorp Super Netball league for the 2020 and 2021 seasons.

Australia’s top netballers will remain the highest-paid female domestic club athletes in Australia, with the Australian Netball Players Association (ANPA) entering into an updated Collective Player Agreement (CPA) with the Suncorp Super Netball league for the 2020 and 2021 seasons.

The new agreement, which will take Suncorp Super Netball athletes and league through to the end of the current broadcast agreement, will see club salary caps increase by 8.65% this year. 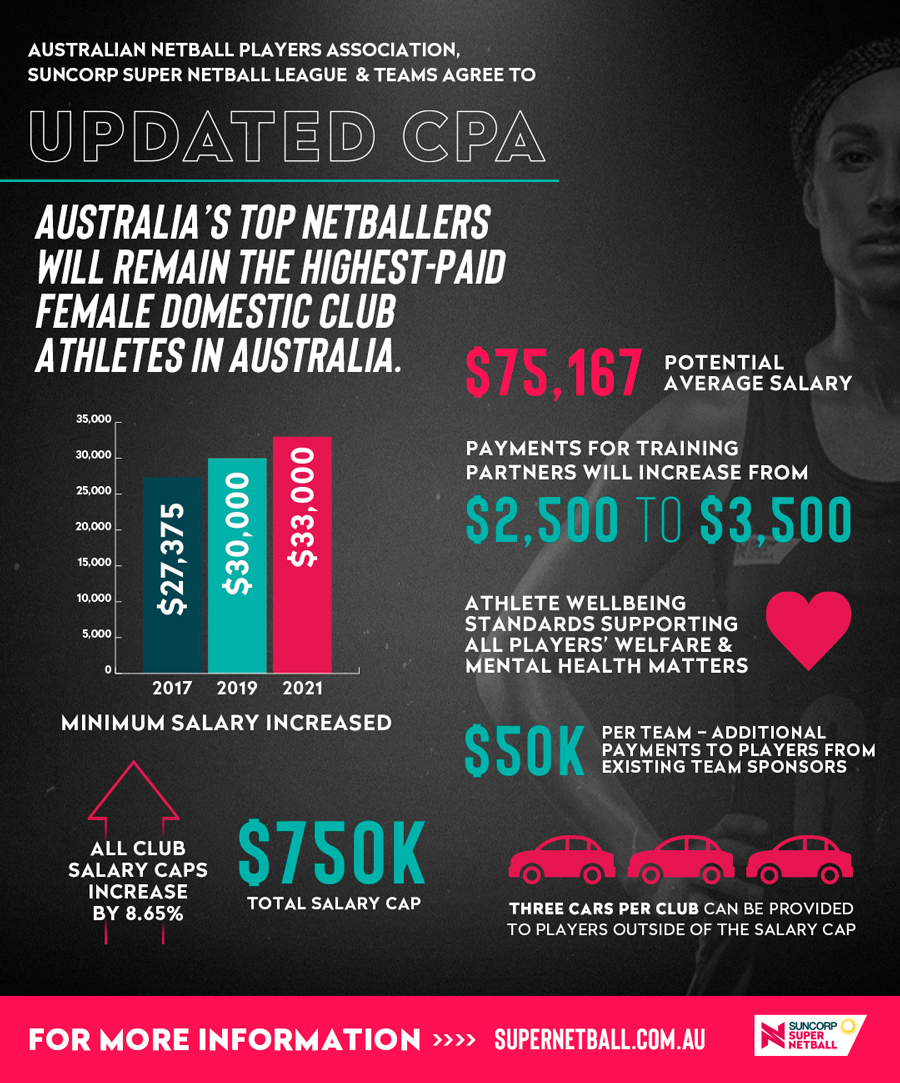 The deal also recognises the increasing importance of athlete mental health and wellbeing and athlete wellbeing minimum standards will be introduced in 2020, whereby each team will commit to providing wellbeing services (to the equivalent of 0.3FTE in 2020, increasing to 0.5FTE in 2021), to work closely with the athletes and Netball Australia’s full-time National Wellbeing Manager.

When the original landmark Suncorp Super Netball CPA was established in 2017, it was agreed that at the completion of 2019, the league and the ANPA would come together to review the terms and conditions and make improvements based on the learnings of the first three seasons.

Suncorp Super Netball CEO Chris Symington said the league values collaborating with its athletes and the ANPA to strengthen the competition and appeal to the world’s best netballers.

“Suncorp Super Netball set the gold standard for women’s sport in announcing the inaugural Collective Player Agreement in 2017 and we’re thrilled to be able to work with the ANPA and our eight teams to ensure the league is constantly evolving and improving conditions for our athletes,” he said.

“Suncorp Super Netball is already the world’s premier netball competition and the league’s vision is to become the #1 women’s sport league globally, so we’ll continue to work proactively with all our stakeholders, particularly the playing group, to achieve that.”

“The playing group prioritised wellbeing and private health Insurance, in addition to an increase in minimum salary and payment made to training partners. All of these areas have seen an uplift, which is of great benefit to the players,” she said.

“The focus on wellbeing and looking after the lower paid players speaks volumes of the playing group’s maturity. All athletes involved in Suncorp Super Netball should feel proud of the outcome, particularly in the wellbeing space. In the ever-increasing pressure cooker of elite sport, netballers want to make sure the environment in which they work continues to be conducive to maximising elite performance as well as nurturing and developing their identity along the way.

“The expansion in the commercial space is exciting as it provides opportunities for players to enhance their earning potential and develop relationships away from the court.”

The 2020 Suncorp Super Netball season kicks off on Saturday 2 May and all teams will gather for the league’s official pre-season tournament, the Suncorp Team Girls Cup, in Sydney on Friday 27 March.