Yet here he is, at 51, drilling the basics of catching, throwing and footwork into his daughter Zoe’s team in Sydney's north-west. Here, after 25 years as a rugby player and 10 as a coach, attempting to guide the Beecroft 12-and-unders to a third consecutive premiership when their hotly-contested Saturday competition resumes.

One of just two ‘dad coaches’ at the club, Tamsett knows of only one other in the broader Hills District Netball Association. “So we’re as rare as Tasmanian tigers,’’ he laughs.

Well, perhaps not quite, but the fitness industry consultant is certainly one of a rare netball breed. His involvement began when he filled in so often as coach of five-year-old Zoe’s original Suncorp NetSetGo team that he took over the role the following year. 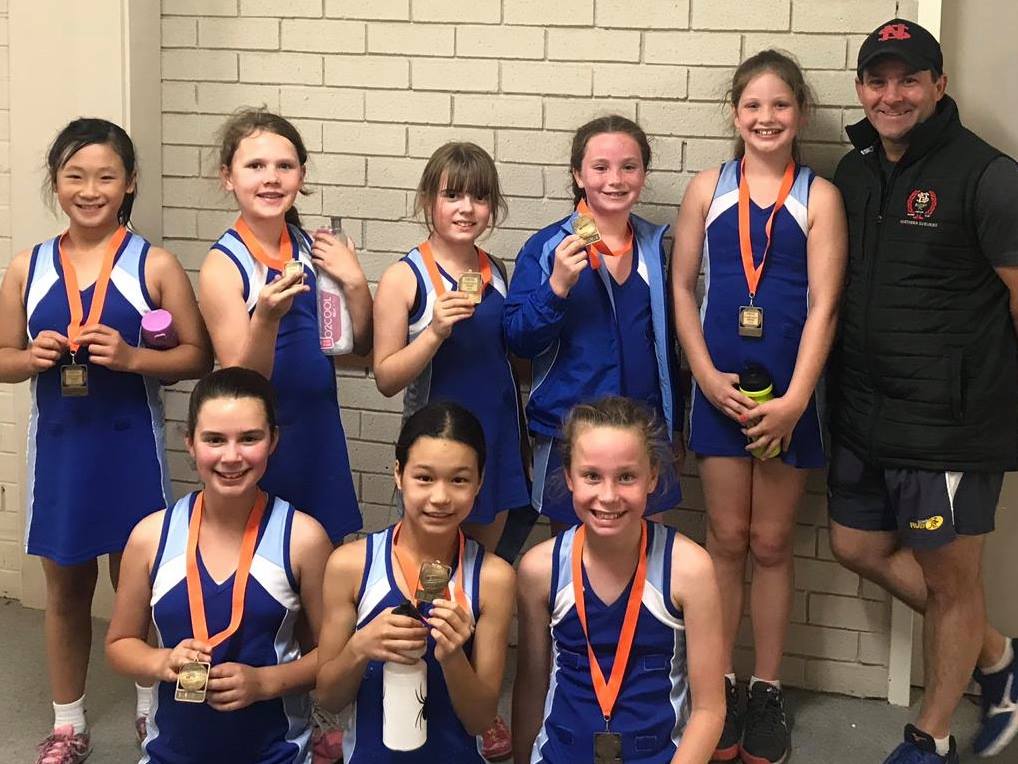 Had a taste. Liked it. Continued on to what among the Beecroft parents is referred to tongue-in-cheek as the “playing for sheep stations” level (aka the 10-and-unders). Remains involved. Still loving it.

“It’s interesting because I’ve certainly learnt the rules on the run, so I’m not your traditional netball coach who’s grown up in the sport, who knows all the intricacies,’’ says Tamsett, who is also now the club’s coaching director, having volunteered when no other hands were raised.

He admits he is still becoming acquainted with the technical and tactical sides of the game - which, admittedly, become more important in the teen years than the very earliest.

“But I’m really glad I did fall into it, because I love coaching and I love seeing the look on the girls’ faces when they do pull off a miracle pass or an incredible shot, or they get an intercept, or they play against a girl who’s a foot taller but they can dodge and weave around that person,'' he says.

Team sport, for Tamsett, is actually about far more. Having fun, for example. Learning responsibility and empathy. Understanding that, as awesome as it is to win, losing well is just as important.

“So I taught the girls from the beginning that if you win the game you have to be gracious, and you have to thank people, and you’ve still got to play again next week, so don’t get on your high horse,’’ he says.

“Then you also have to be gracious losers, congratulate the other team, thank them, and just stay humble. So I guess they’re the kind of life lessons that I wanted to teach them - and we’ve been lucky enough not to lose too many games.’’

Repeating the basics, over and over, is his coaching philosophy #101. Throwing, catching, not stepping. Over and over. We suggest that the best metaphor, perhaps, is that they are to netball what the times tables are to maths. Tamsett's own numbers are that anything less than 10/10 for shoulder passes, means there is still work to do. So, right, back to it.

“I say to our girls ‘if we can be the best in the competition at the basic skills, then the rest will take care of itself,’’ he says, importing a philosophy from rugby of not overcomplicating the game.

“I say ‘you’ll enjoy yourself more if you can catch the ball, we’ll probably win more games, but also our shooters get more attempts, so we don’t even have to work on our shooting. All we have to do is work on catch, pass’.’’

As Tamsett teaches, he also learns. About the attention spans of young athletes. for one thing. As someone used to coaching first grade rugby players with Super Rugby or Wallabies aspirations in Sydney's Shute Shield, there have also been adjustments to drills, language, attitude. All of it.

Yet one constant, he insists, is the team-first philosophy, where the highest scorer in a sport where only two per team can shoot goals at any one time is not necessarily the best player. The scoreboard is incidental to effort, selflessness, contribution.

Tamsett has also come to appreciate the resilience of those in his care; the self-described “over-communicator” confident that honesty and openness means the girls know where they stand. “I can say to them ‘great game, or that wasn’t your best game’ and because of that culture we have, they don’t break down in tears.’’

Mostly, that includes Zoe, with whom he admits there have been “ups and our downs… we’ve had some hard conversations, but I think we’ve only had tears at training twice in four years. I make it pretty clear to her that when we’re at netball I’m not dad, I’m the coach, and she respects and understands that, so she makes life pretty easy for me.’’ 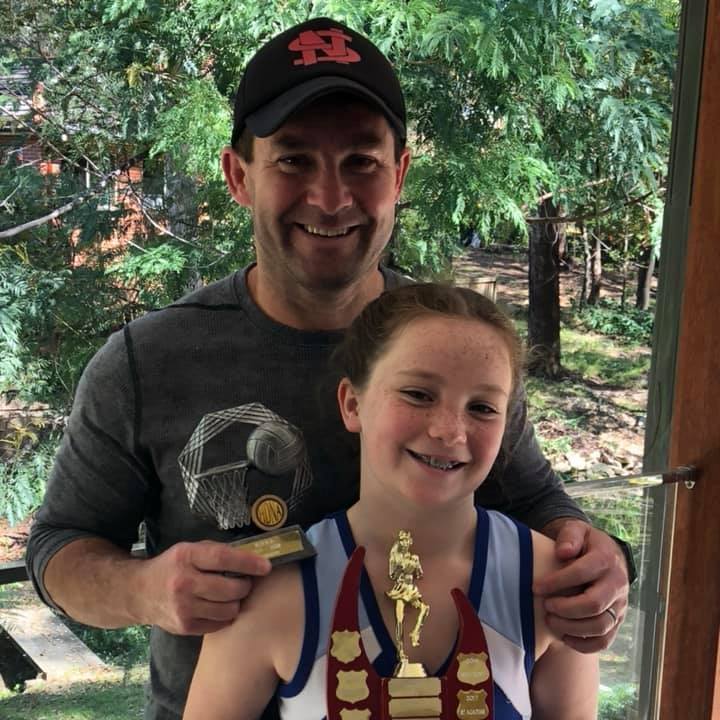 The pair’s love of netball extends to the elite level, with the family attending every Giants’ home game in Suncorp Super Netball, while also avid Diamonds followers. As a lifelong student of sport, Tamsett appreciates the power and speed of the ball movement, and particularly admires the skills of the likes of Laura Langman and former great Kim Green.

But it goes beyond that. Watching the “quite phenomenal” way the stars of the sport interact with the fans has been an eye-opener when compared with those in the rugby codes, for example.

“It’s like the women of netball understand who their market is, and they understand that ‘if I look after this little girl, and I sign her autograph or I spend a minute talking to her, that little girl will never forget that and want to come back every week to watch SSN’. And I do notice that difference.’’ 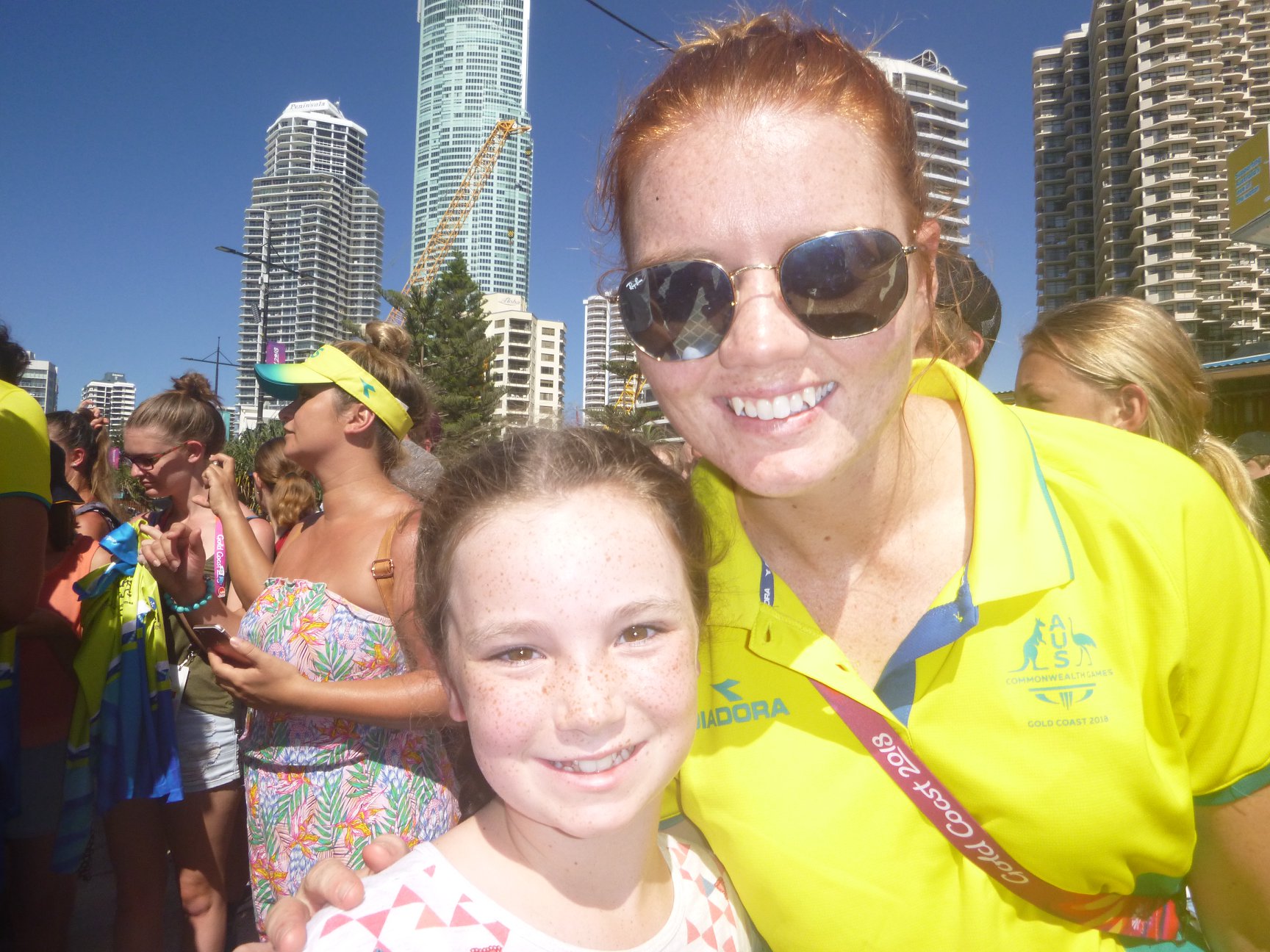 Never more so than at the 2018 Commonwealth Games on the Gold Coast, when at the day-after event for the fans, Diamonds’ silver medallists Steph Wood and Caitlin Thwaites took the time for a photo and a chat with Zoe. Who (see above) will never forget it. Tick. Tick.

Inclusiveness at the lower levels is another plus. Tamsett’s team may contest the top division in their age group, but all around are diversities of ability, body shapes and sizes playing a game they love. One that anyone can, with rules that ensure that no one player can carry the ball from end to end and dominate without the help of their teammates.

If Tamsett thinks the tracksuits could do with a stylish overhaul, what remains a traditional sport in so many ways is still a beacon for community engagement and universal respect for its many and tireless volunteers.

It has struck him that few of the hundreds of thousands who play every week will rise above suburban level, leaving the rest to play for the love, the friendship, just to be part of it. The 'dad coach' raised in another sport sees less aspirational players than the simply inspirational.

Personally, Tamsett admits it felt slightly “weird” at first to be a middle-aged man teaching young girls a sport he had never played, but that was his issue, because he has never been ostracised, just supported and embraced.

“I would encourage all dads to get involved - whether it’s being a manager or being a coach, it’s incredible,’’ he says. “I’ve never felt that men are not welcome. Men are welcome, they are welcome into the Netball Nation.’’