The 1971 Australian team has celebrated half a century since their victory against New Zealand in Jamaica.

Gaye Teede carried the Australian flag and led her team through the victory arch on 13 January 1971, and now 50 years later, the former Australian Captain has celebrated the anniversary by sharing her treasured memories of the 1971 World Netball Tournament win in Jamaica.

Let me set the scene and point out that the organisation of Netball in the 1960’s was a far cry from the highly organised business of netball as we know it today. We did, however, enjoy the status of being the first-choice sport for most young girls.

The advent of the first World Tournament (WT) in 1963 marked the beginning of formalised international competition. However, with both the ensuing WT in 1967 and 1971, there was little awareness of the need for, or development of a national team program.

We played the National Champs annually and an Australian team was selected at the conclusion. Invariably the team was a nominal team and did not compete. It is worth noting, that during this time there were few international tours, maybe one every two years.

Despite victory in 1963, no player continued to play and gain selection in 1967, so we fielded a totally new squad. In comparison, New Zealand, still smarting from their one goal loss in 1963, retained three players, including their impressive attacking line.

Adding to the inexperience, the 1967 campaign was also affected by a lack of preparation time. A mere week of solitary training before the tournament begun. After selection in August of 1966, the team didn’t meet again until August 1967.

Needless to say, the inexperienced and underprepared Australian team trailed New Zealand throughout, eventually going down by 6 goals. Whilst we were disappointed with the result, I believe it gave rise to a burning desire to do better. There is a common saying in sport - “you learn more from your losses than from your wins.”  This was true of the situation we found ourselves in. I believe this somewhat “raw” experience impacted and shaped the culture of the team that went on to win in 1971.

This feels like an appropriate moment to acknowledge that the 1971 team achieved many firsts. Stella and Margaret Gollan – our bookends at GS and GK were the first sisters to represent Australia at a WT. We had five Western Australian players in the team of 10. I’m not sure this has been matched. And our Manageress, Marjorie Ritchie and Coach, Wilma Shakespeare were the first mother and daughter combination to represent Australia at an international level.

There is so much I could say about our leader, Wilma. Her contribution to our success in 1971 cannot be understated. We didn’t have training camps back then. Our individual training and fitness programs were set down on paper, complete with stick figure drawings, sent in the mail and left up to us to get the work done.

It was Wilma’s game time approach that made the greatest impact on me and influenced the way I saw the game. Wilma brought a highly analytical approach and literally “opened up my eyes” to the wealth of information available within the game. For me this was totally new experience. In addition, Wilma had the capacity to draw upon her recent playing experience at the 1963 WT and always had a strategy or two to offer thereby empowering players.

With the added impetus of four players and coach having experienced world tournament action previously, the Jamaican campaign began with a week-long training camp in Melbourne immediately prior to departure, a prolonged travel schedule to reach the West Indies and then another week in Jamaica prior to the WT.  What an exhilarating schedule we young women faced – New Zealand, Tahiti, Mexico City, Madrid, London, Paris, Rome, Greece, Bangkok. Amazingly exciting, as most of us hadn’t experienced international travel, certainly not to this extent, virtually around the world. Eight weeks in total. I can only assume an around the world ticket was the economical way to tackle travel at this time of limited overseas travel.

Invaluable time together, as with the 1963 Australian team where the team had some six weeks of bonding and preparation time on board a cruise liner en-route to the UK. Although we didn’t know it at the time, we had accidentally stumbled on a key factor in team preparation, time spent together, both on and off the training track. Common to both successful campaigns, 1963 and 1971.

The third WT presented a further challenge that highlighted the differences in member country’s interpretation of the rules. International competition highlighted the need for a unified game, operating under one set of rules. Essentially the UK teams played under a rule that allowed “blocking” - players were permitted to have arms outstretched at waist level. Under this interpretation it was not uncommon to either take off or change direction to run into this block resulting in the attacking player penalised for contact.

At the same time in Australia, we played to a different interpretation of the rule which required arms to be held loosely by your side.  A great deal of apprehension surrounded this quandary. A decision to clarify the IFNA ruling was scheduled in the days leading up to the WT, so our preparation included developing coping strategies for the UK interpretation as no one could predict the outcome of the vote.

I am pleased to say the Australian interpretation was the preferred choice, much to our relief. It did, however, indicate the difficulty of preparing for two differing interpretations and highlighted the challenges IFNA representatives had in working to establish standardised rules.

The third WT was played outdoors; I think on a Plexipave surface under the Jamaican sun. There was little publicity, promotion, and media especially when compared with the modern game.

It was here we saw the emergence of an English Goal Shooter, Judy Heath, who captured everyone’s attention with her high shooting technique and with it, shooting percentages in the 90’s. The England game proved to our toughest encounter. Their accuracy kept them in the contest, and we had to come from behind in the fourth term for a gritty win by 1 solitary goal.

By contrast our match against New Zealand on the final day was something of an anticlimax. We had played our “big” game against England, then found New Zealand a more comfortable task, controlling the match all the way to take it out by 6 goals, 48 – 42. And so, our intense rivalry with New Zealand continued.

It is hard to find the right words to describe the victory - pure joy and exhilaration mixed in with relief and satisfaction. We had done the “hard yards”, even being away from home and loved ones on Christmas Day, we had achieved what we set out to do, bring the world title back to Australia. We were world champions. Quite a feat!

Personally, amongst the myriad of delights, one of the proudest moments of my career, was carrying the Australian flag and leading the winning team through the victory arch. In our time there was little “hoopla” around winning. I don’t think we even received a medal or memento of our win, the one celebration being the traditional victory arch where all teams celebrated us as winners. Fast forward 50 years to January 2021 and a get together with those team members located in Western Australia and email contact for the eastern states team members was a delightful way to celebrate the 50th anniversary of our win in the 3rd World Netball tournament. 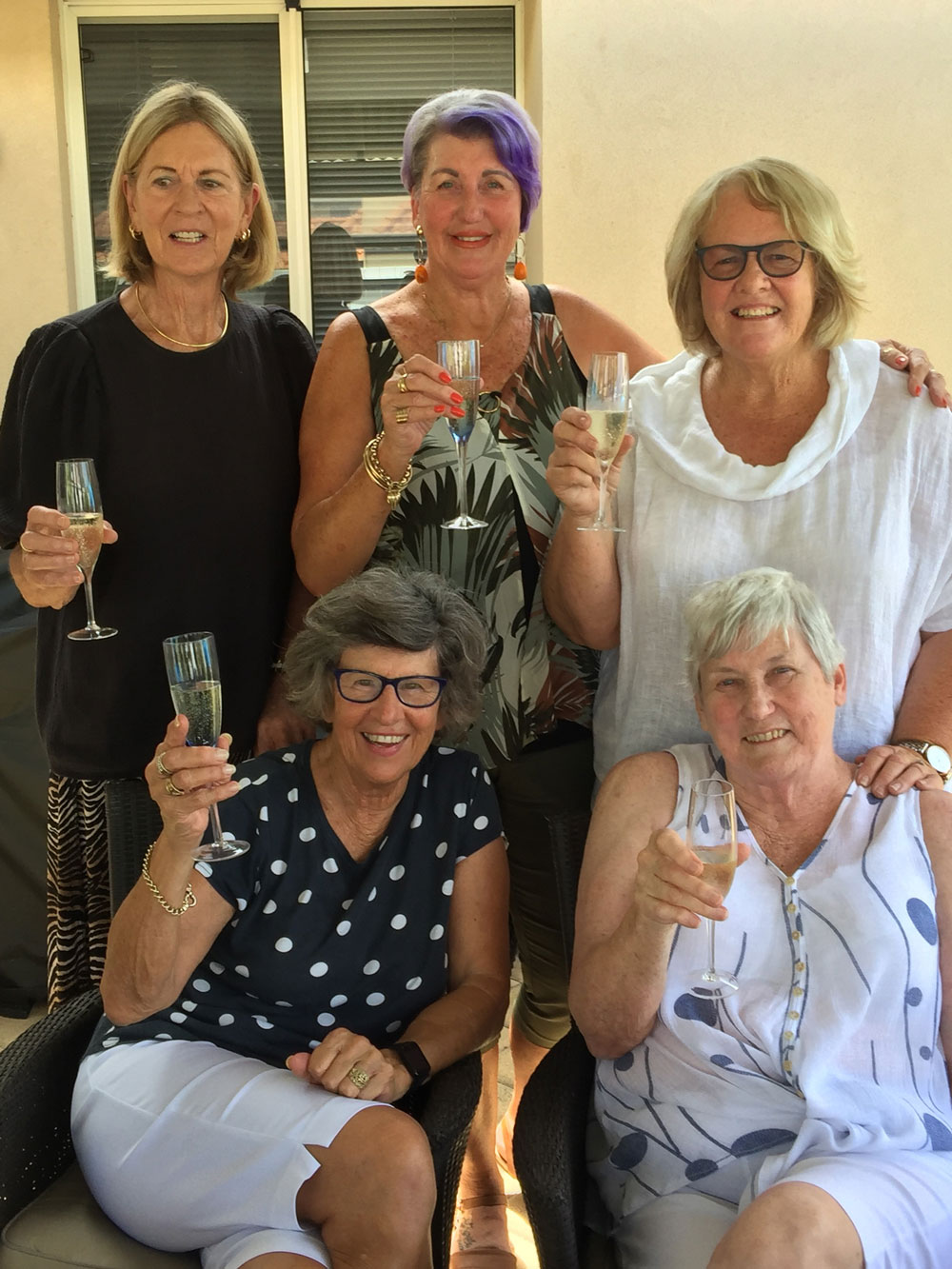 With a glass of bubbly in hand, we laughed, reminisced, and remembered some of our favourite moments off the court.

The accommodation at the University of the West Indies, whilst basic was adequate, certainly no room service. The frequency of finding curried goat on the menu. The charm of the Jamaican people. Scary bus drives on narrow roads across the mountain range in the middle of the island and the lovely Montego Bay. The resourceful players, who shall remain nameless, who packed paper disposable knickers to avoid laundry. And of course, our strict walking out uniform protocol which included gloves, hat, coat and handbag and no additional items to be worn.

I will never forget my biggest Jamaican fan, six-year-old Robbie. On the final day, as we prepared to face our old nemesis in New Zealand, he gave me small posy of gold flowers for good luck. I have kept his card all these years later. 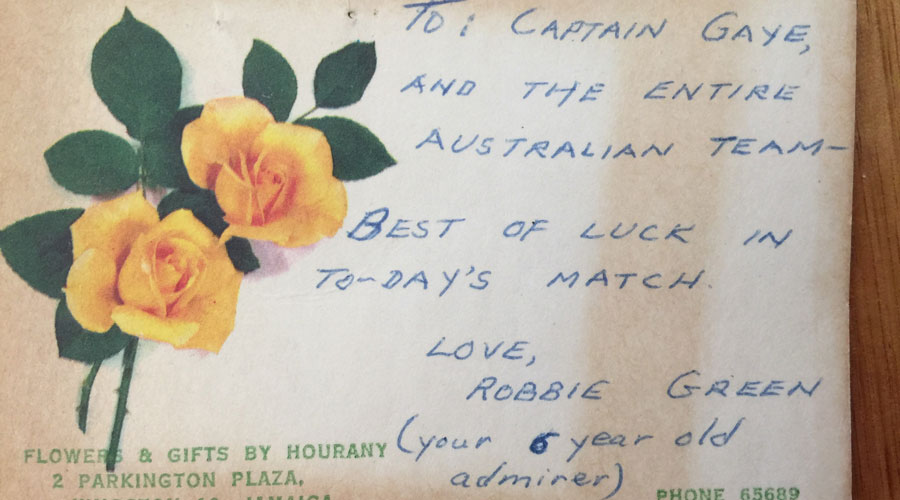 Whilst the memory of fine details might have faded, the strong emotions and memories continue today. We shared a wonderful moment in time and netball history, with a great bunch of people, which has left us with an immense sense of achievement and pride.