On the wall outside the canteen at the Grafton Netball Association is a photograph of a beloved local man and the caption “Dennis’ Kingdom.’’ Former GNA president Cathy Walls stops to kiss it each Saturday, while one of the region’s favourite sporting daughters, Verity Charles, makes sure to give it “a little love tap” whenever she is back home visiting her childhood courts in northern NSW.

The late Dennis Walls - or “Den Boy” as West Coast Fever star Charles called one of her favourite people and biggest fans - passed away in 2015, just eight months after being diagnosed with lung cancer. His widow, aka “Big Cath”, had suggested Dennis - who had previous retail experience - as a temporary canteen supervisor for a few weeks. You know, just while they searched for someone more permanent. 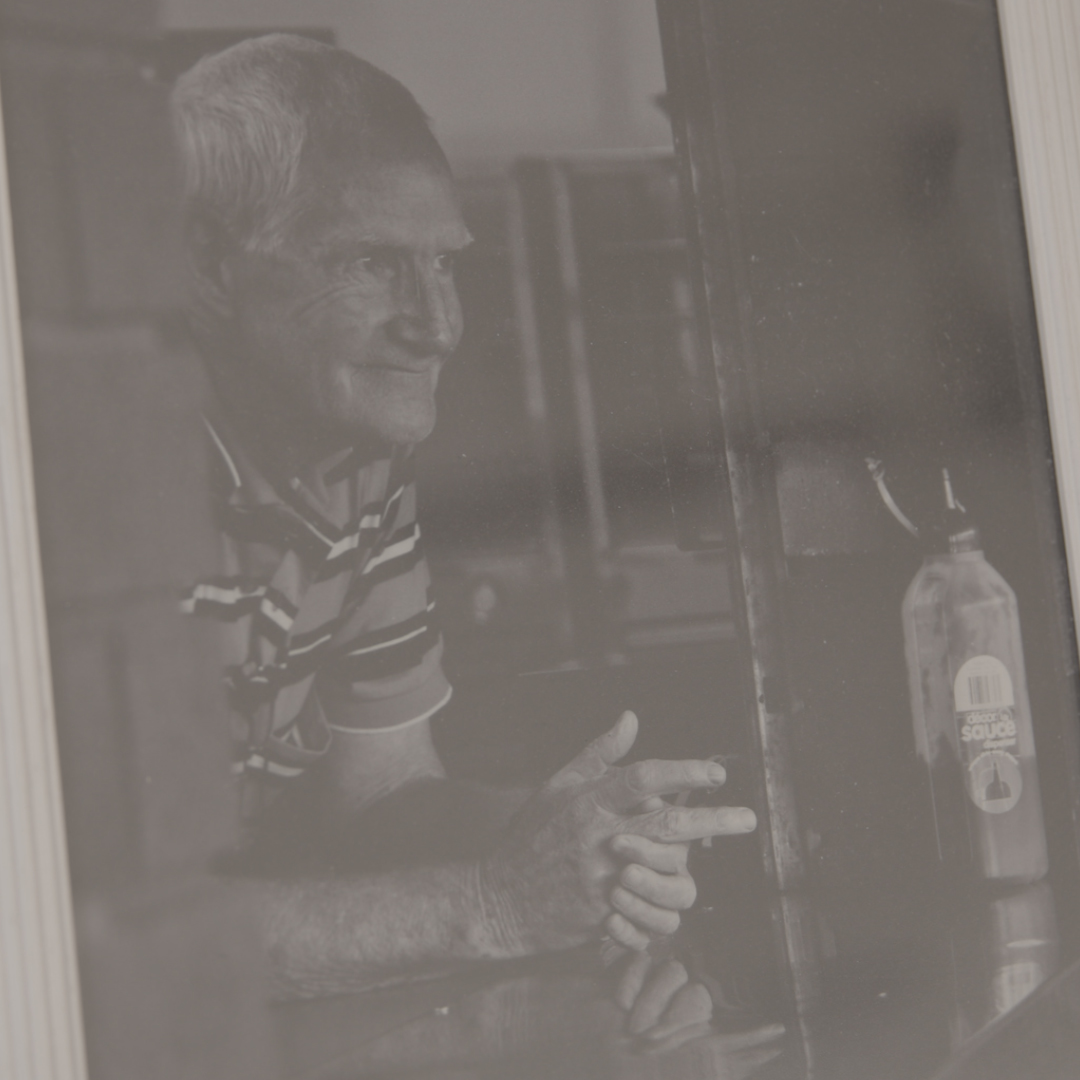 “His time turned into 16 years,’’ says Cathy, 64, of the Scottish native, who knew nothing about netball when he emigrated with his Australian bride-to-be in 1983.

One of Dennis’ main helpers was a sweet tooth and talented junior known back then as Verity Simmons, whose tasks included helping Den Boy pack the lolly bags. Perhaps you've heard of the system: jelly ears and cherry clouds would be distributed using the time-honoured “one for the bag, one for us’’ method. Selfless as she was, Verity was up to the task. 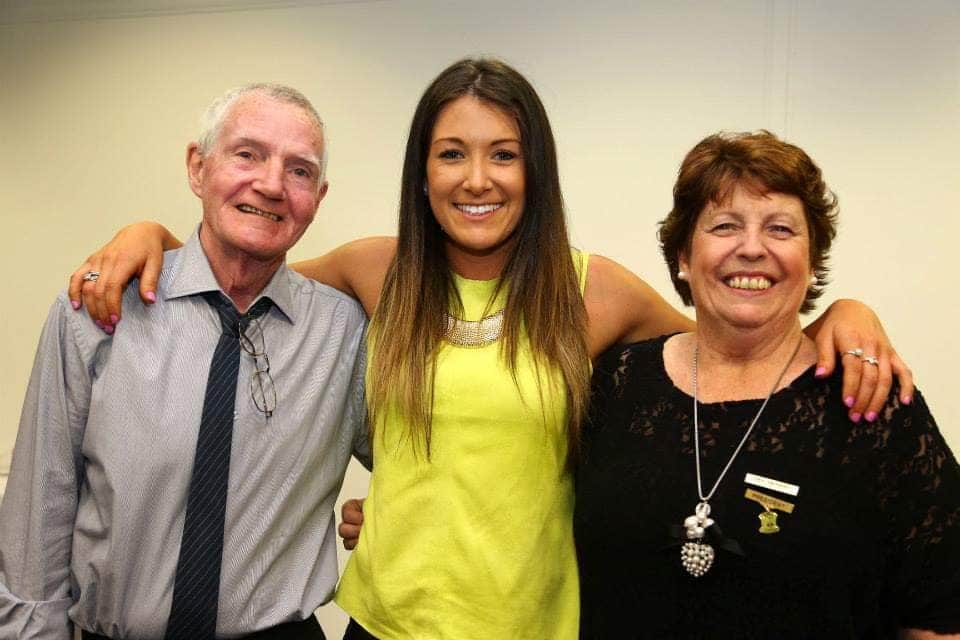 “Everyone knew Den Boy,’’ the midcourter recalls, fondly. “He had an amazing little accent, and it was just like his little kingdom in that little canteen. It was his fortress, and he would open it up for absolutely anything. Even if we went down for after-school training, no matter what the time, he’d come to open the canteen for people.

“I used to go in there a lot and help him out - I pretty much jumped on that job! He’d wait for me to finish my netball game and then come in; that was our thing. When I could see big long lines outside I’d quickly run in and he’d always save me an ice-cream or some lollies or something for afterwards, just to say thank you.’’

The gratitude was returned, later, in the form of training gear from the Fever, as well as Verity’s second club, the Queensland Firebirds. Being slight of build, the shirts became Den Boy’s unofficial Saturday uniform, and so thrilled was the netball convert with a signed player card from his No.1 player that he kept it in his wallet for the rest of his days.

Yet there is an odd emptiness now; one felt most keenly by Cathy, whose three daughters grew up with the Simmons girls and all remain close family friends. The Walls were known affectionately as the first couple of Grafton netball- Cathy was association president for 16 years after starting as a club delegate, and continues to contribute as the MPIO (Member Protection Information Officer), an umpire, and umpires’ coach.

She remembers Dennis as a “very particular” family man who lined up the drinks in the canteen fridge and knew if even one was missing. As someone who - to Cathy’s regular chagrin - insisted on sorting and safely storing the money away as soon as he got home each Saturday. Even more than five years on, it can be difficult returning to the "Kingdom" Dennis built.

“He loved it. He told me who he thought should be in the representative teams and who I should select, and who’s good, and who’s not, and I said ‘yes, Den, yes Den’,’’ she laughs. “But it was great, because people called us Mr and Mrs Netball, and it was something we did together.

“We’d come home and we’d discuss the day and he’d say who helped him in the canteen, and I’d talk about what went on in control, so when he died I felt a real loss, and I stepped down from being president. I just felt it wasn’t the same after he died. I still help out with coaching and umpiring and stuff but, you know…

“I feel funny going into the canteen, because he’s not there, and I’m not arguing with him! Everyone’s doing a good job, so it’s not that. It’s just not the same without him, you know? My sisters used to say to me, ‘you and Dennis don’t go away together, you don’t do anything together’, but we did netball together. That was our thing.’’

He put his hand on his heart when told of the canteen tribute the day before he passed away in April, 2015, and made front page news in the local paper, the Daily Examiner. “It was ‘Canteen boy dies!’ Netball lost without the canteen man’,” says Cathy, and one suspects it was not an unwelcome epitaph.

When Cathy and her three daughters took (half of) Dennis’ ashes back to Edinburgh, they sat, crying, in the landmark Princes St Gardens as bagpipes played for the annual Fringe Festival… and, well, couldn’t do it. So back to Grafton (half of) Den Boy came. “We said ‘oh well,  we took him on a big holiday!’,’’ Cathy laughs.

“We had the wake for him at the netball courts, and my sister got a bit worried and said ‘you’re not gonna scatter his ashes on court four are you?’ And I said ‘oh, I don’t know. Maybe I will, one day. We’ll see. Maybe when I go, they can scatter us both on court four’.’’

If the loss of Dennis has left a gap that can never be filled, then Cathy has retained her love of netball and appreciation for the community that still remembers him with such gratitude and warmth. She remains in close contact with Verity, travelling the four hours north to Brisbane for the Fever’s away games, and sometimes to Perth - such as for the 2018 grand final - to be courtside for big occasions at home.

“When Den Boy passed away it was tragic for all of us,’’ says Charles. “It was huge. He left a hole in everyone’s hearts. It was tough, really, tough. And it’s really weird that he’s not (in the canteen) any more. It’s really changed, because that was his little spot.’’

The one where there was no calculator and, with maths not young Verity’s strong suit, she would take and fill the orders, while Den Boy took care of the money. Every cent accounted for, just like the drinks in the fridge. (See "very particular" above).

“Grafton’s obviously quite a small town, but anyone to do with netball knew who he was,'' says his enthusiastic, now high-profile, assistant. "Anyone that came in from Coffs Harbor or Lismore or anywhere for carnivals, they all knew Den Boy would be in the canteen, working non-stop. He was a beautiful man. 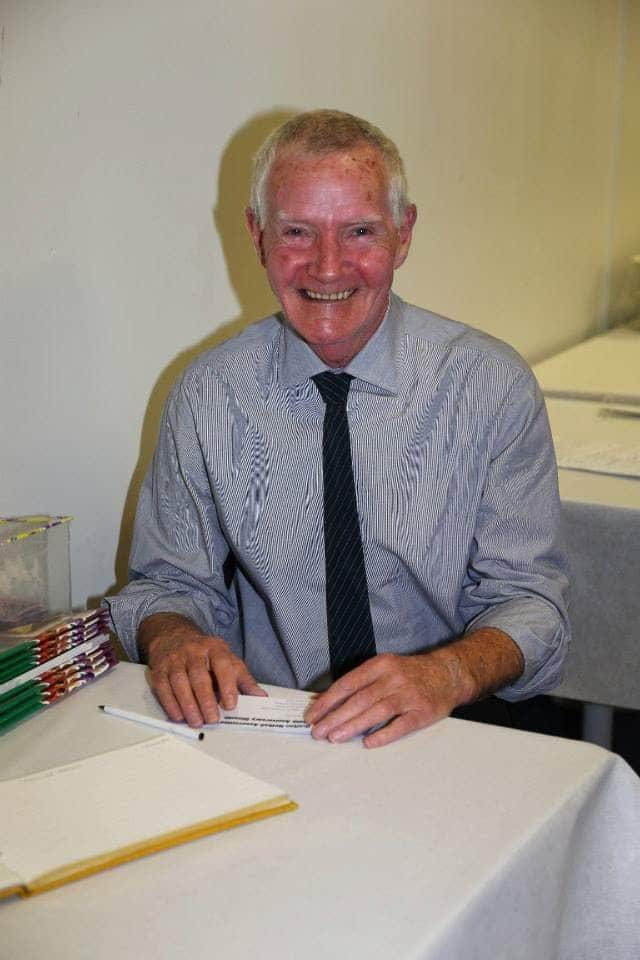 “Those type of people are such rare gems. I don’t know how he used to do it. It was hot in there, and I think that’s why everyone just loved him, because they knew that he just loved to give back and be there for everyone. It might not sound like a big thing to a lot to people, running a canteen, but he ‘made' Grafton netball.’’

In partnership with Cathy, whom Charles says remains so passionate that she “doesn’t miss a beat. She loves it. Lives and breathes it. It’s her everything, and that’s what keeps her going. Big Cath was president of Grafton, and her and Den Boy, they ran the shop there.’’

In the literal sense, too. Thank you. And bravo.

Confident Girls Foundation and Suncorp respond to communities in need