Mia Stewart is many things.

She’s an active daughter and sassy sister. She loves netball and swimming. She is also the only known paediatric case of proximal femoral focal deficiency requiring rotationplasty from the last decade in Australia.

The eight-year-old from Caringbah in Sydney’s south was diagnosed with the condition, also known as PFFD, before she was born.

The rare limb disease is a non-hereditary birth defect that affects the pelvis, particularly the hip bone and the femur, which results in the hip being deformed and the leg shortened.

In Mia’s case, no femur and no hip socket developed fully before birth.

“Some kids with Mia’s condition have the shortness of the femur like she does, but a really good hip and so that gives them more options, but Mia was a bit of a mystery to everyone,” Mia’s mum Leila Bright said.

“Normally those diagnosed with PFFD are one in 200,000, but Mia’s specific circumstances mean it is more like one in half a million to a million.

If you tuned in to the 2022 Suncorp Super Netball Minor Semi Final last weekend, you would have seen little Mia walk out with the GIANTS Netball team as the Woolworth’s NetSetGO Little Leader. 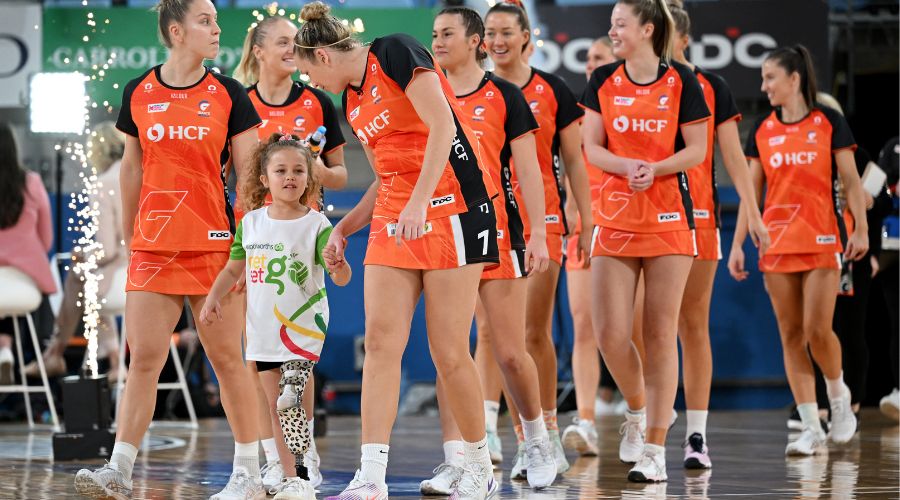 Had it not been for mum Leila and dad Brent’s commitment to their daughter, Mia’s weekend experience may not have been.

“Even ever since I was pregnant, because we found out when I was 19 weeks pregnant, I had been emailing all around the world and for answers,” Leila said.

“A surgeon in America kept coming up, Doctor Paley, and he just happened to be coming to Australia when Mia was about two years old to see other families, so we met up with him.”

Mia’s family learnt more in an hour with Doctor Paley than they’d learnt in two years. They were told Mia needed rotationplasty, its rarity dictating the extreme costs involved.

“We’d do anything for Mia,” Leila explained.

“People find it hard to wrap the cost of the surgery around their heads and that it’s something not offered here in Australia.

“It's not that the surgeons aren't great here, it's just that our population doesn't allow for things that are rare all the time.”

For Mia’s case, the rotationplasty surgery was like the procedure used for people with cancer. A cancer patient with typical hips will have the cancer cut out, then the leg moved up and rotated into place.

With Mia’s already short leg, her surgery took the leg off and rotated it 180 degrees so her ankle joints would act like a knee joint, and her old knee joint would act as a functioning hip joint.

Leila said Mia’s surgery would not have been doable without the help they gratefully received.

“We fundraised for the surgery across two to two and a half years,” she said.

“The fundraising was very grassroots based, and we did everything from sausage sizzles and bake sales to running black tie balls with 200 people in attendance each year. People would even just be giving us $5 in the Wagga Bunnings.

“I am the type of person that if I can do something, I'd rather do it myself than ask for help. So that was a challenge for me personally overcoming that.

“Just to know that people cared that much was amazing.”

Mia had her successful rotationplasty in 2019.

Throughout the entire endeavour to reach the moment, Leila and Brent kept a key positive message at the forefront of Mia’s mind.

“We've never wanted to limit Mia,” Leila said, “so we've always encouraged her to try everything, whether that means learning to do the same thing as someone else or learning to do it in a different way.

“It wasn't until I had Mia that I realised how much people with disability were put into a box of ‘you poor thing’ or ‘life must be so hard’ instead of just giving them that space and that opportunity to at least try.”

So, when Mia came to her parents asking to play netball with her friends, yes was the obvious answer.

“Brent and I grew up in country New South Wales playing netball, playing rugby, playing touch footy, like that was life.

“We didn't want to say no to that experience for Mia, so we ran it past her team, and they were incredibly supportive. There are extra things that we need to consider with Mia like falling and stuff, but also, we don't want to wrap her up in cotton wool and tell her she can't, because she can actually.”

The goaler in the making piped up when asked about playing netball.

“I love playing with my team,” Mia said. “Being with my friends and having fun is very good.

The smile on her face beamed as she spoke about her Woolworth’s NetSetGO Little Legend experience and the height of her heroes.

“I was a little bit nervous at the start, but then I had a really good time and walked out with Jo Harten. I couldn't believe how tall they were.

“One of the ladies said that Tilly (Matilda McDonnell) would probably be my favourite.”

Leila expressed her appreciation for the opportunity of the game to share their story and show the world how unique and outgoing Mia is.

“I just hope that it changes perceptions a little bit for everyone,” she said.

“I the whole give it a go thing, it’s very easy as a typical human being to feel sorry for yourself. You're allowed to have moments, obviously, where you're upset about it, but we can't get stuck there.

“I just want Mia to know that there is opportunity and possibility in everything that comes her way, even if she has to push a little harder to make others around her realise that she can.

“I give her the space to navigate that on her own, and if it gets too much, then I'll step in and I'll help her educate.

“I just want her to grow up being strong, independent, and knowing that she's capable and not defined by the limitations – because she isn’t.”

Mia’s GIANTS will play in the Preliminary Final against the Melbourne Vixens this Saturday to fight for a place in the 2022 Suncorp Super Netball Grand Final.

Mia’s advice to the team, “keep trying and good luck.”