Nita Tauhalaliku and the netball community in Tonga go hand in hand.

Tauhalaliku has dedicated more than a decade to developing the next generation of talent in Matahau.

First falling in love with the game in primary school, the hardworking wing defender turned goal attack went on to enjoy a stellar career at the international level, representing her country as both a player and coach.

Now a Technical Development Officer at Tonga Netball Association, Tauhalaliku spoke with Netball Australia about her journey and her role within the sport for development program, One Netball Tonga by Team Up.

What does a typical day look like for you?

I spend most of my time outdoors, either running trainings or tournaments in the communities. I also visit schools to encourage participation in netball and player development. I work closely with our officials and volunteers to promote and deliver grassroots netball, ensuring that netball reaches all corners of Tonga including our most remote islands, Niuatoputapu and Niuafo’ou.

What made you pursue netball and how did you get involved?

I first played netball in primary school, and I’ve been captivated ever since. Growing up, I was always very active, even competing in the inter-collegiate races and relays, but my heart was always drawn to netball, which led me to joining my high school netball competition. After high school, netball at the time, didn’t have much to offer here in Tonga, especially when it came to pursuing a career. There was only a small group of passionate netballers trying out for the national team to compete in the Pacific Games which was only once in every four years.

In the early 2000s I travelled to Australia, and it was on this trip that I witnessed first-hand the vast opportunities, skills and experiences one can acquire through netball. Once I returned to Tonga, the first thing that came to mind, was to approach my high school principal and discuss ways I can help identify and develop the talents and skills of young girls that are or could be passionate about netball. It was after working with the students that I applied to work for the newly established Tonga Netball Association. 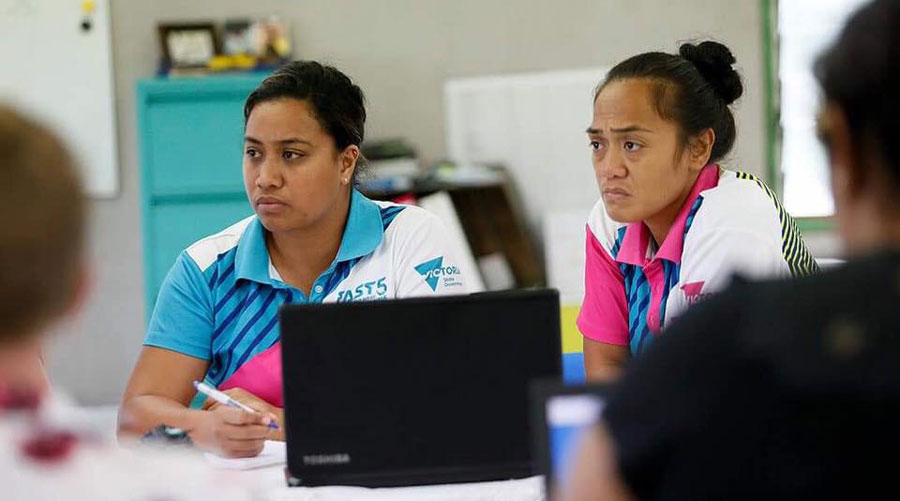 Do you have any accreditations or qualifications?

I hold an Accredited Coaching & Umpiring Level 2 qualification - the highest qualification in coaching and umpiring in Tonga. I’m proud of my achievement and I hope to develop my skills and knowledge even further, if given the opportunity.

What do you enjoy most about your role?

Seeing the sheer joy in the faces of our officials and volunteers when we reward them for the super amazing work they do. They work tirelessly behind the scenes to deliver netball events and competitions here in our country.

What is the One Netball Tonga program and why is it important?

One Netball Tonga is all about helping Tongan communities experience lifelong enjoyment, social inclusion and improved physical health through netball.

Netball is a platform for people from different walks of life to come together as equals. It doesn’t matter if you’re 50 or 15 years old, a CEO of a company or a stay-at-home mum, a member of the LGBTQI+ community, a father of thee or just a straight single guy; once on court, we’re all netball players. This is the spirit and message that we want to continue delivering and promoting to the community and people of Tonga. The One Netball Tonga program is helping to drive the message that netball is for everyone.

What impact or changes have you seen since the One Netball Tonga program was launched?

People are becoming more active and living healthier lifestyles. There is also a significant change in mindset within communities. Netball is no longer perceived as sport for only women, girls, and leiti. More and more men and boys are playing netball and they are loving it.

How do you think sport can make a positive impact on individuals and communities in Tonga?

Tonga tops the list with some of the highest rates of obesity, putting the community at risk of non-communicable diseases, such as diabetes, kidney disease, and heart conditions. Sport and physical activity are our best defence. We try to identify people that are not involved or are being left out by other sports and invite and them to come and try netball. Giving them the opportunity to keep active, socialise and meet new people.

What impact has the program had on you personally?

The program has allowed me to develop and put into practice my leadership skills. I have been able to continue building relationships and learning from the different people from the netball family, here in Tonga and around the world.

Netball has made me a much stronger person and has contributed to shaping who I am today. The financial stability has also allowed me to provide for my little family of five.

So, what's next? What do you want to see at Tonga Netball Association in the future?

Netball in Tonga has come such a long way, but there is still plenty to do. Looking ahead, I want to see strong pathways for players, coaches, umpires and bench officials. Pathways will put us in good position to have a national competition where we bring teams from all the outer islands. To also have our own netball courts and club house. We’re currently sharing facilities with several other sports which can be challenging if the space isn’t available.

The One Netball Tonga program is made possible thanks to the support of Team Up, an Australian Government initiative which builds on more than two decades of sport for development work and activities in the Asia-Pacific region.